| My book on MSBuild and Team Build | Archives and Categories Thursday, June 15, 2006

A few days ago I received an email about an MSBuild visual editor! This was something that I was interested in doing a while ago, but never got around to doing it. This tool is called MSBuild Sidekick, and you can download it for free from http://www.attrice.info/msbuild/index.htm. I have downloaded it and played around with it. I think it’s a good tool for people who are getting started with MSBuild, but for those who use MSBuild on a regular basis I don’t think it can replace the productivity that is achieved with Intellisense. They have an interesting way of representing the build file visually, and after some time if the right extensions are added it may be a tool that I’d use over Visual Studio to edit my MSBuild files. One of the challenges of representing a build file is that you have to be aware of where your new declarations are being placed. For instance if you have two properties defined, lets say Property1 and Property2. If Property2 depends on Property1 then you have to make sure that it is declared after Property1. As far as I could tell there was no way to achieve this without viewing the source of the project file through the tool.

In previous versions of the Visual Studio the build customizations were basically limited to a PreBuildEvent and a PostBuildEvent. Now we have MSBuild which allows for many very specific and complex build customizations. But Microsoft obvioiusly must continue to support the Pre/Post build event. It is something that already exists, many people are familiar with it, and its very simple. Let’s see how this is implemented within MSBuild. If you add a Pre or Post build event from Visual Studio, then examine yore project file you’ll find something like the following declared.

This entry was inspired by a post on the MSDN MSBuild forum.

If you look around the net you'll find a few different Xml loggers for MSBuild. When I was writing my book I decided to write my own Xml Logger for a few different reasons. The source for the Xml logger that I wrote is available at apress.com. I'm currently in the process of trying to get some shared space for me to place my tasks and loggers that I've written for everyone to have a look at. Once I get that squared away I'll make sure to write an entry about it. In the mean time let's talk about my Xml logger. What is different about my Xml logger versus some others that you may find? When I was looking around for one, I noticed that the ones that I found didn't support building solution files very well. So that was a deficiency that I wasn't willing to sacrifice with. Besides that, I noticed that none of them had an append options as most file based loggers do. So I added that to my Xml logger. I think this is a good option if you are performing a nightly ( or continuous ) build. That way you have one place to go to each time you want to see how your build progressed. However this xml file can get quite large if your build is spanning many projects.
At the bottom of this blog you can download the dll for this logger (Contained in a zip file). The source will be made available soon. There are 4 logger arguments:

Here is some sample output:

The syntax to use this logger at the command prompt is:

There is no required parameters the defaults are:

Ok, there's several posts about whats good/bad about both of these languages, this isn't one of those. At the end of the day it doesn't matter which technology is the best, but which ones are going to employ you. About a year ago, I think there were many more Java jobs here in Jacksonville (FL) then there were C# (.NET) jobs. I've noticed that there has been an increasing need for C# developers here, can't really say about the Java positions though. Recently I've been playing around with the blog search engine technorati.com, they have some really cool features. If you've never been there you should give it a shot. One of the features is to chart the number of blog entries over a period of time, based on keywords. To view the graph of MSBuild related blogs click on the link below

I decided to compare the results of a search of "C#" and "Java", and I was really surprised to see the results. Below you can see the images that I saw. Note: These images are static and not updating. 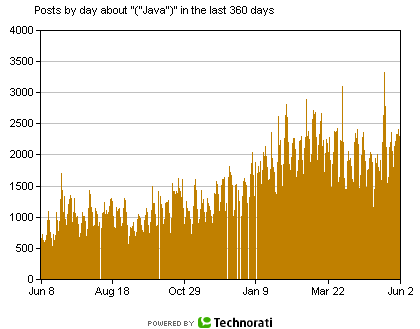 From the technorati.com site it stated that there was 668,373 Java related posts and 17,100,527 C# posts! That is an incredible difference. There could be a few reasons for the difference:

Since this is a simple keyword search I think we can safely assume that (3) is not the culprit. I think its really a combinition of (1) and (2). Another aspect there are many Java related blog entries that don't actually have the word Java in it. But I'm sure the same goes for C#. Previously when I was doing mostly Java work, I thought one of the cool things about Java was the community effort. With the open-source side and all. I thought that C# (.NET) would lack this for sure. But now that I know better, I know that it certainly is not like that. I think the community effort for C# (.NET) is just as strong, if not stronger, then the Java side.

I'm not sure what the significance these number have, but it certainly does make be happy to be in the C# camp. :)

Frequently I hear people asking "How can we use Visual Studio 2005 for 1.1 development". If you are writing managed code (C#,J#, or VB.NET) then you are in luck. There is a toolkit that was released from the guys at Microsoft that can do this for you. Its called MSBee (MSBuild Everett Edition). You can download this toolkit at Codeplex. The creator of MSBee blogs about it at: http://blogs.msdn.com/clichten/default.aspx