| My book on MSBuild and Team Build | Archives and Categories Friday, March 31, 2006

In case you haven't already heard a service pack will be released for both VS 2003 & VS 2005 this year! SP1 for VS 2003 is scheduled to ship during the second quarter, and SP1 for VS 2005 in the third. You can read more about this at: http://msdn.microsoft.com/vstudio/support/servicing/. I think its kind of interesting that VS2003 didn't have a service pack for 3 years, yet 2005 is having one not even 1 year later. Perhaps because of all the new features that were shipped with this version, however VS 2003 shipped with many new features as well. Since MSBuild is technically a part of the .NET Redistributable, I'm not sure if the service packs will impact anything related to MSBuild. If I find out more I'll be sure to post more.

Previoiusly I wrote about the Microsoft SDC Tasks library, there is another great resource for MSBuild tasks. This is the MSBuild Tigris Tasks project. This is an open source project, so you can submit your tasks to this library as well. Tigris.org is known for their Source Control Management (SCM) tool, Subversion. I've used Subversion previously and was pleased with it, but my favorite is Team Foundation Server :) If you're using Subversion as your source control you'll be glad to find many task for accessing your repository. From the project's site here is a list of the MSBuild tasks that are either completed or currently under development.

I'm working on an application during my spare time, its called Dreamcatcher. The purpose of this dream is to maintain a digital dream journal, or any journal for that matter. A major goal of the Dreamcatcher is to facilitate finding specific dreams easily, this is going to be accomplished by search mechanisms, and a "tagging" dreams with specific information. For instance you'll categorize the dream, you can place keywords (or labels in gmail terms) onto a dream, and other similar things. These will allow the user to find the desired dream in a set of different ways. Currently all of the data will be stored on the uesrs local machine, but I was also thinking of having a database available for users to keep their entries. This will be determined by user feedback, at a later stage. Here is what the main screen looks like: If you are interested in using this app please send me an email (sayed.hashimi [AT] gmail.com )and I'll keep you posted on its progress. I'm expecting to have a useable release in the next couple months.

A co-worker of mine is playing the role of Jesus in a play at his local church. He had to have fake hair implanted inorder to fulfill the role properly. So this week he is coming to work looking a little different. I thought I'd take a picture so everyone could see this. The information for the play is available at http://www.northfloridapassionplay.com/default.htm 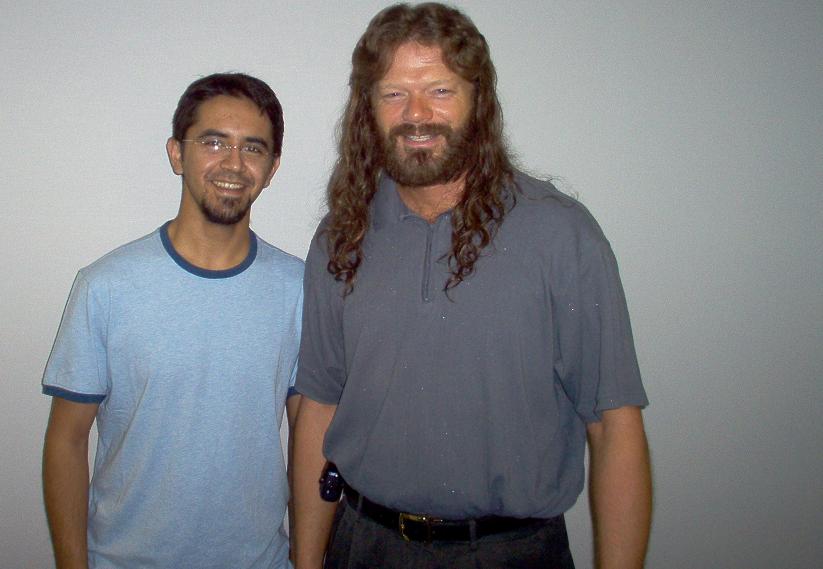 One of the Microsoft teams based in the has created a library of MSBuild tasks that is available for you to download at: http://www.codeplex.com/sdctasks You can download binary versions as well as all the source code for these tasks. There is almost 170 tasks that they have made available! Below is a list of them all if you are interested in what they are.

I’m sure that some of these tasks you’ll find completely useless. For example I presume that most of you will not be needing the SourceDepot.* tasks. But there are several very cool tasks that are made available here. Tasks for code coverage, tasks for invoking common tools and other things. I think its great that they have made this available and hope to see some of these tasks integrated into the next realease of MSBuild.

A friend of mine was installing SQL Server 2005 & Visual Studio 2005 on a new machine he received. After installing SQL Server 2005, he tried to install VS 2005 and received an error stating that he couldn't install VS 2005 becase beta versions were present on his machine. I had this problem earlier when I needed to upgrade my machine from RC to RTM. The problem was that he accidently installed SQL Server 2005 CTP. I told him to run the him to download and run the Visual Studio Beta Removal tool. When I had this problem it solved it right up for me. Unfortunately, I think Windows got confused with all the installing/un-installing that was going on. He got his machine to the point where SQL Server wouldn't show up in the add/remove programs list, he couldn't run the un-installer for it because it wasn't present, and he couldn't re-install the same CTP version to uninstall it correctly. And of course he couldn't install VS 2005. It seemed like he was in a real tough spot, we searched around for more information about how to get around this situation. I found a tool, the Windows Installer Clean Up tool, that can be used to removal applications and installer files from failed apps that don't show up in the add/remove programs list. When he ran this tool he was able to see and remove the SQL related components. Following this he was able to install the correct versions of SQL Server 2005 & Visual Studio 2005.