| My book on MSBuild and Team Build | Archives and Categories Thursday, November 19, 2009

I have a new video posted discussing MSBuild, you can see this video at http://www.dnrtv.com/default.aspx?showNum=158. This is a continuation of my first appearance discussing on dnrtv.com. Take a look and let me know if there are any particular topics you'd like for me to discuss. One of the topics I discuss in this video is Open Source MSBuild tasks. One of the most useful task libraries is the MSBuild Extension Pack, there is a great set of tasks there. If you haven't seen it already you should take a look.

I will be giving an online LiveMeeting Session hosted by Microsoft next week on Wednesday October 14, 2009 at 4 PDT (Redmond Time). The title is Simplifying Deployment with the Web Deployment Tool (MSDeploy). If you are not aware of MSDeploy it is a newly released tool to ease the pain of deploying ASP.NET sites. If you are doing any type of deployment of ASP.NET sites (Manual or Automated) then you must check out MSDeploy, it will change how you look at deployment of ASP.NET sites all together. Right now there is not an abundant amount of knowledge or material available on this tool, but I think that will change soon. Hopefully I can contribute to some of that. In any case, if you are available I would love to have you check out my session. There will be some guys from Microsoft on the line including the Program Manager of the Web Deployment Tool Vishal Joshi. I'm sure he will chime in when I try to mislead you guys by feeding your mis-information.

Here is the info about the presentation.

You are invited to join the talk which is scheduled for

Deploying ASP.NET Websites has always been a challenge and different teams have used different approaches to overcoming those challenges. Microsoft has offered some support for making deployment easier in the past. For instance they first introduced Web Deployment Projects for Visual Studio 2005, and also have a version for 2008. Web Deployment Projects do greatly simplify the process of calling the aspnet_compiler and aspnet_merge tool but even though their title states "Deployment" they had no support for physically deploying the site. Now Microsoft has introduced the Web Deployment Tool, also known as MSDeploy. MSDeploy will bridge the gap between taking a web site and physically deploying it to its destination. With MSDeploy you can easily and very effectively perform tasks such as pushing an ASP.NET site (Web site, Web Application Project, ASP.NET, etc) from one machine to several other machines. This is achieved by the target machines having the MSDeploy Remote Agent Service installed and running. You can sync two different Web Sites that are hosted in IIS, you can create a web package (simply a .zip file) and use that as your source, you can sync two different folders, and many other options. Another compelling feature of MSDeploy is that it will be integrated into Visual Studio 2010. From Visual Studio 2010 you can compile your ASP.NET Web Application Project and then create the Web Package which contains all your content files plus IIS settings. This one file will full describe your web.

Please join 10 minutes prior to the start time.

First Time Users:
To save time before the meeting, check your system to make sure it is ready to use Microsoft Office Live Meeting.
Notes

Troubleshooting
Unable to join the meeting? Follow these steps:

1. Copy this address and paste it into your web browser:
https://www.livemeeting.com/cc/mvp/join

If you still cannot enter the meeting, contact support

Microsoft Office Live Meeting can be used to record meetings. By participating in this meeting, you agree that your communications may be monitored or recorded at any time during the meeting.

A few weeks ago Carl Franklin interviewed me for his site dnrtv.com on the topic of MSBuild. I'm on the home page right now but the permalink is http://www.dnrtv.com/default.aspx?showNum=145. Check it out. I think we may do a couple other shows to cover a bit more detail; we just got started with MSBuild in that video.

A few weeks ago I blogged about a video that I was in on Channel 9. Since then the creator of the video Russ Fustino has decided to break out his It's All About the Tools series into individual video entries. He has been posting 18 different videos for 18 consecutive days. I think this is a great idea, because it allows people to go right to the content that they are particularly interested in. There are a bunch of different topics covered from Visual Studio DB Pro to using Fiddler and of course my MSBuild Twitter Logger video which was posted just the other day. If you haven't seen this video yet now is your chance, take a look and let me know what you think. I'm interested in making more videos so if you have some specific topics that you think are cool let me know.

My MSBuild Video on Channel 9

This past weekend I gave a presentation on MSBuild at the Tampa Code Camp, which I'm glad to say went very well. Besides that I met Brian Johnson from Microsoft. He shot a video of me discussion using MSBuild and Web Deployment Projects to automate deployment of Web Projects. You can see the video at http://channel9.msdn.com/posts/brianjo/Sayed-Hashimi-on-MS-Build/

Let me know what you think, I'm pretty excited because this is my first Channel 9 video.

The sample demonstrated here was inspired by some content that can be found in my new book Inside the Microsoft Build Engine. The book will be published the beginning of January, please buy several copies! I will post more detailed information about the book soon, but we have completed working on it. 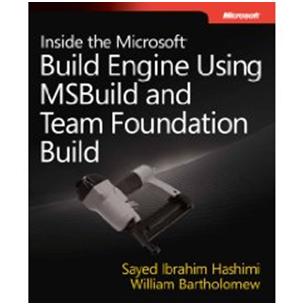