| My book on MSBuild and Team Build | Archives and Categories Friday, February 1, 2008

A while ago I ran the Disk Cleanup utility on my personal notebook. Today I needed to start the SQL server on this machine so I attempt to start the service and I get this error in the Event Viewer 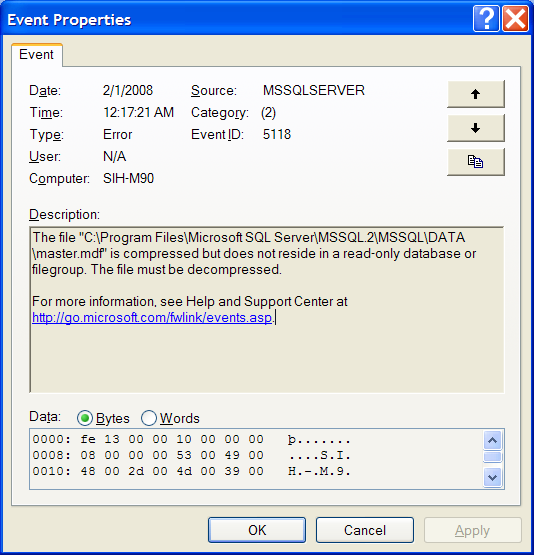 So I made sure that the drive wasn't compressed, and it wasn't then I looked at the file itself and it was. I'm guessing that the Disk Cleanup deal performed this, because I know that I wouldn't. To solve this you right-click on the file and make sure that the checkbox shown is not checked. 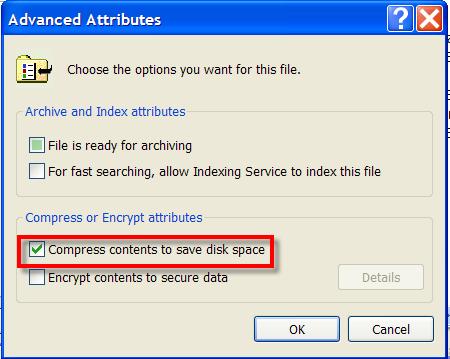 Once you make sure this is done, you should be able to start the service again.

A friend of mine was installing SQL Server 2005 & Visual Studio 2005 on a new machine he received. After installing SQL Server 2005, he tried to install VS 2005 and received an error stating that he couldn't install VS 2005 becase beta versions were present on his machine. I had this problem earlier when I needed to upgrade my machine from RC to RTM. The problem was that he accidently installed SQL Server 2005 CTP. I told him to run the him to download and run the Visual Studio Beta Removal tool. When I had this problem it solved it right up for me. Unfortunately, I think Windows got confused with all the installing/un-installing that was going on. He got his machine to the point where SQL Server wouldn't show up in the add/remove programs list, he couldn't run the un-installer for it because it wasn't present, and he couldn't re-install the same CTP version to uninstall it correctly. And of course he couldn't install VS 2005. It seemed like he was in a real tough spot, we searched around for more information about how to get around this situation. I found a tool, the Windows Installer Clean Up tool, that can be used to removal applications and installer files from failed apps that don't show up in the add/remove programs list. When he ran this tool he was able to see and remove the SQL related components. Following this he was able to install the correct versions of SQL Server 2005 & Visual Studio 2005.