Last week we rolled out some updates for our Visual Studio 2010 Web Publishing Experience. This post will give you an overview of the new features which we released. In the coming weeks there will be more posts getting into more details regarding individual features.

You can get these updates in the Windows Azure SDK for Visual Studio 2010. When you download that package there you will also get the latest tools for Azure development.

The new high level features include the following.

When you right click on your Web Application Project (WAP) you will now see the new publish dialog. 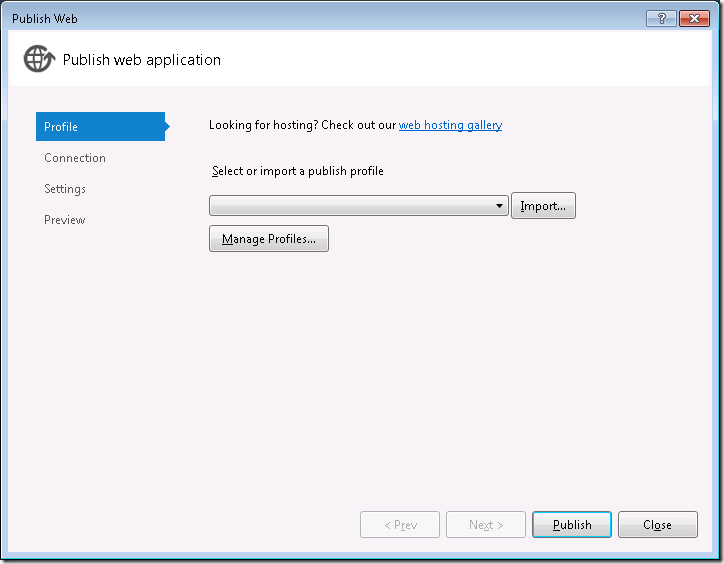 On this tab you can import a .publishSettngs file, which many web hosts provide, and you can also manage your publish profiles. If you are hosting your site on Windows Azure Web Sites then you can download the publish profile on the dashboard of the site using the Download publish profile link. After you import this publish profile you will be brought to the Connection tab automatically. 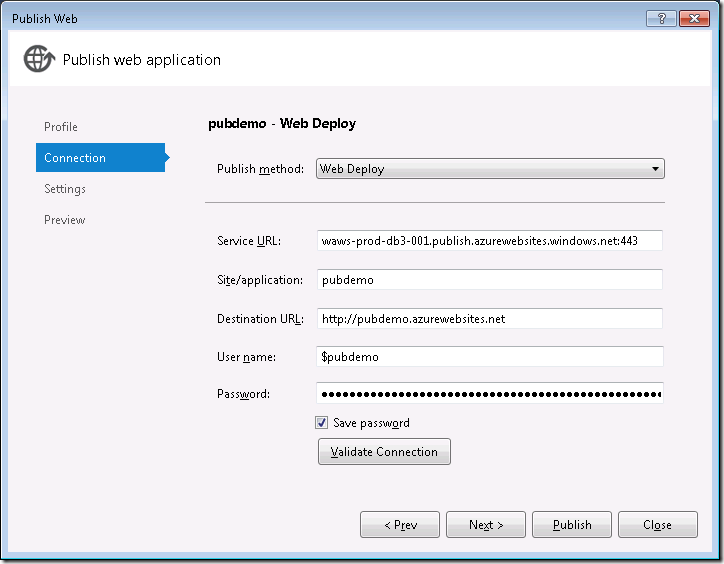 On this tab you can see all the server configuration values which are needed for your client machine to connect to the server. Typically you don’t have to worry about the details of these values. Next you’ll go to the Settings tab. 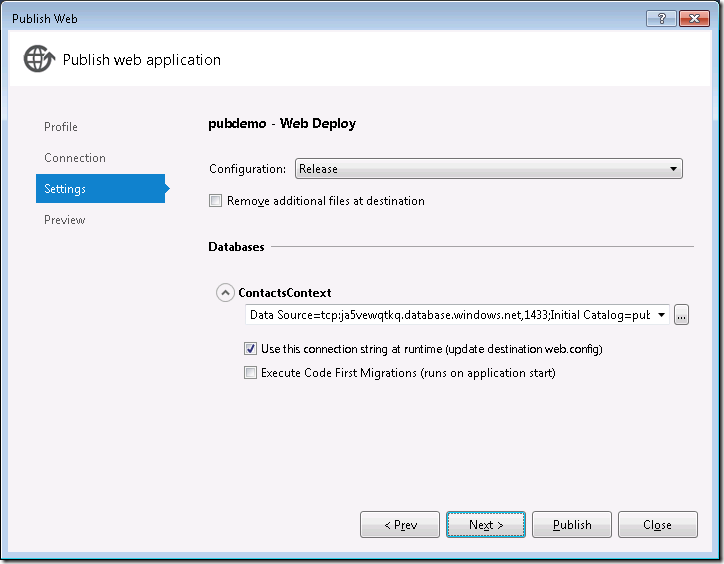 On the Settings tab you can set the build configuration which should be used for the publish process, the default value here is Release. There is also a checkbox to enable you to delete any files on the server which do not exist in the project.

Below that checkbox you will see a section for databases. The sample project shown has an Entity Framework Code First model, named ContactsContext, and it uses Code First Migrations to manage the database schema. If you have any non-EF Code First connection strings in web.config then those databases will show up as well but the support for incrementally publishing the schema for those has not yet been finalized. We are currently working on that. You can visit my previous blog entry for more info on that. 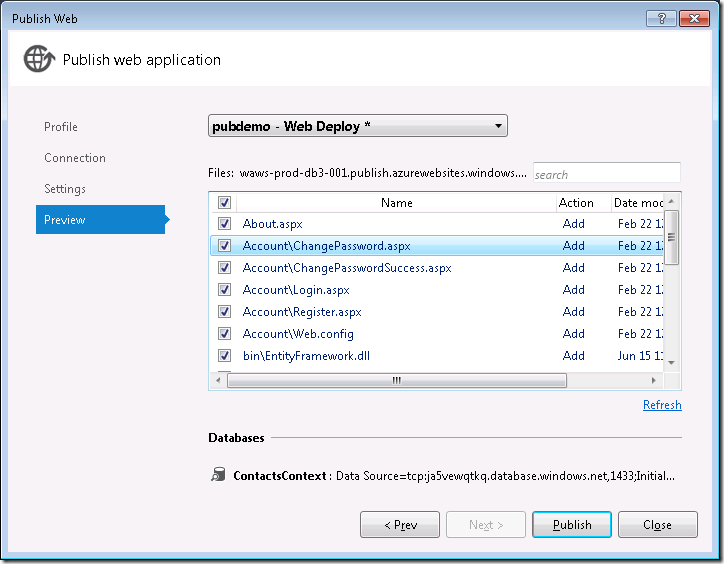 Once you are ready to publish you can click the Publish button. You can monitor the progress of the publish process using the Output Window. If your publish profile had a value for the Destination URL then the site will automatically be opened in the default browser after the publish has successfully completed.

One of the other changes in the publish experience is that publish profiles are now stored as a part of your project. They are stored under the folder Properties\PublishProfiles (for VB projects its My Project\PublishProfiles) and the extension is .pubxml. You can see this in the image below. 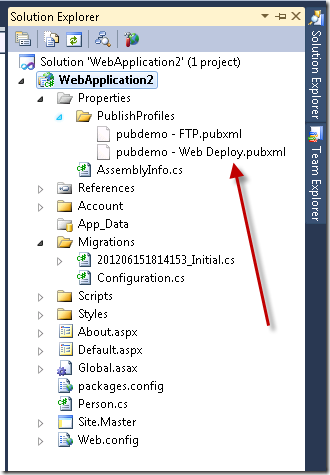 These .pubxml files are MSBuild files and you can modify these files in order to customize the publish process. If you do not want the publish profile to be checked into version control you can simply exclude it from the project. The publish dialog will look at the files in the PublishProfiles folder so you will still be able to publish using that profile. You can also leverage these publish profiles to simply publishing from the command line. For example you can use the following syntax to publish from the command line.

If you have any questions please feel free to directly reach out to me at sayedha(at){MicrosoftDOTCom}.

Database settings in the VS Publish dialog

In Visual Studio 2010 we introduced a database publishing experience in the Package/Publish SQL (PP/SQL) properties page. This support relies on generating create scripts from the source database and then executing those scripts when you publish your web application. For more details regarding this feature take a look at Package/Publish SQL Tab, Project Properties. One of the negative aspects of the implementation that we have there is that the DB schema publishing is not incremental, it always executes create scripts. So in many cases you publish your app for the first time and things are great, but the next time you try to publish you receive errors because it tries to create DB objects which already exist.

In our improved publish dialog we have a new database publishing experience which is incremental, so you don’t run into the same issues when re-deploying your database. All of the configuration for this is within the publish dialog itself. If you have a project which already has DB publish settings on the Package/Publish SQL tab (under any build configuration/platform) then you will see the message shown in the image below. 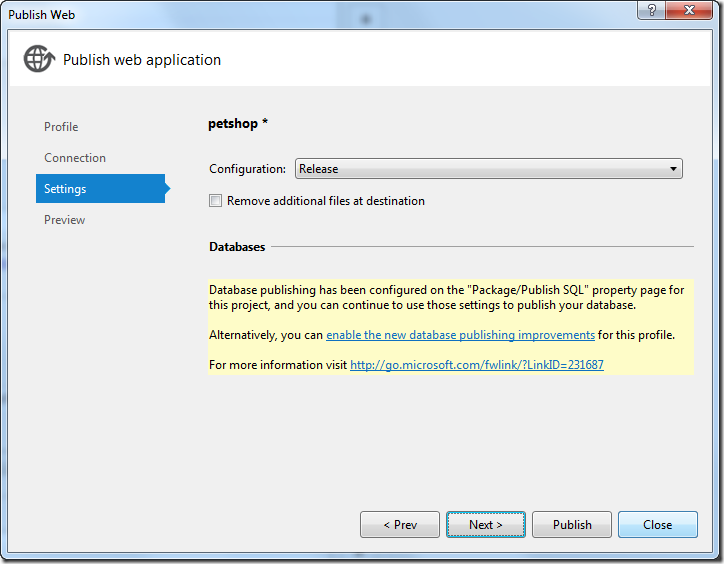 The new incremental DB schema publish mechanism is not compatibly with the feature set on the PP/SQL tab. For each web publish profile you can either use the settings on the PP/SQL tab or you can opt-in to the new experience on the publish dialog. We implemented it this way in order to introduce the new feature set and to ensure that existing publish scenarios are not broken.

FYI there is a related post on why the Update database checkbox is disabled in the publish dialog which you may be interested in.

If you have any questions please feel free to directly reach out to me at sayedha(at){MicrosoftDOTCom}.

The other day I saw a question on StackOverflow (link in resources below) asking How you can create a Web Deploy (AKA MSDeploy) package when publishing a ClickOnce project. The easiest way to do this is to use the Web Deploy command line utility, msdeploy.exe. With the command line you can easily create an MSDeploy package from a folder with a command like the following:

Here you can see that I’m using the sync verb, along with a contentPath provider (which points to a folder) as the source and the destination is using the package provider, this point to where I want the package to be stored.

Now that we know what target to extend as well as what property we can use to refer to the folder which has the content we can complete sample. We need to edit the project file. Below is the full contents which I have placed at the bottom of the project file (right above </Project>).

Here I’ve created a couple properties as well as a new target, CreateWebDeployPackage. I have declared the property WebDeployPackageName which will be the name (excluding path) of the Web Deploy package which gets created. This defaults to the name of the project, but you can override it if you want. Next I define the property, MSDeployPath, which points to msdeploy.exe. It will pick the latest version.

The CreateWebDeployPackage target just constructs the full command line call which needs to be executed and invokes it using the Exec MSBuild task. There are a couple subtle details on the target itself though which are worth pointing out. The target has declared AfterTargets=”Publish” which means that it will be invoked after the Publish target. It also declares DependsOnTargets=”Publish”. Which means that whenever the target gets invoked that Publish will need to be executed before CreateWebDeployPackage.

Now that we have defined these updates when you publish your ClickOnce project (wither through Visual Studio or the command line/build servers) a Web Deploy package will be generated in the output folder which you can use to incrementally publish your ClickOnce app to your web server. You can find the latest version of this sample on my github repository.

How to take your web app offline during publishing

I received a customer email asking how they can take their web application/site offline for the entire duration that a publish is happening from Visual Studio. An easy way to take your site offline is to drop an app_offline.htm file in the sites root directory. For more info on that you can read ScottGu’s post, link in below in resources section. Unfortunately Web Deploy itself doesn’t support this

. If you want Web Deploy (aka MSDeploy) to natively support this feature please vote on it at http://aspnet.uservoice.com/forums/41199-general/suggestions/2499911-take-my-site-app-offline-during-publishing.

Since Web Deploy doesn’t support this it’s going to be a bit more difficult and it requires us to perform the following steps:

Now that we know what needs to be done let’s look at the implementation. First for the easy part. Create a file in your Web Application Project (WAP) named app_offline-template.htm. This will be the file which will end up being the app_offline.htm file on your target server. If you leave it blank your users will get a generic message stating that the app is offline, but it would be better for you to place static HTML (no ASP.NET markup) inside of that file letting users know that the site will come back up and whatever other info you think is relevant to your users. When you add this file you should change the Build Action to None in the Properties grid. This will make sure that this file itself is not published/packaged. Since the file ends in .htm it will by default be published. See the image below. 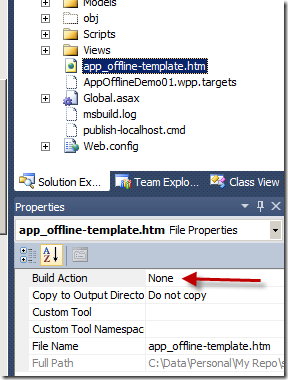 Now for the hard part. For Web Application Projects we have a hook into the publish/package process which we refer to as “wpp.targets”. If you want to extend your publish/package process you can create a file named {ProjectName}.wpp.targets in the same folder as the project file itself. Here is the file which I created you can copy and paste the content into your wpp.targets file. I will explain the significant parts but wanted to post the entire file for your convince. Note: you can grab my latest version of this file from my github repo, the link is in the resource section below.

The implementation for #1 is contained inside the target PublishAppOfflineToDest. The msdeploy.exe command that we need to get executed is.

In order to do this I will leverage the MSDeploy task. Inside of the PublishAppOfflineToDest target you can see how this is accomplished by creating an item for both the source and destination.

#2 Publish the app, and ensure that app_offline.htm is contained inside the payload being published

This part is accomplished by the fragment

The element for MsDeploySkiprules will make sure that app_offline-template.htm itself doesn’t get published. This may not be required but it shouldn’t hurt.

Now that our app is published we need to delete the app_offline.htm file from the dest web app. The msdeploy.exe command would be:

This is implemented inside of the DeleteAppOffline target. This target will automatically get executed after the publish because I have included the attribute AfterTargets=”MSDeployPublish”. In that target you can see that I am building up the msdeploy.exe command directly, it looks like the MSDeploy task doesn’t support the delete verb.

I’m happy to say that I was offered, and accepted, a position on the Web Platform and Tools team with Microsoft. I will be a Program Manager on that team. In a nutshell I will be responsible for helping to make development easier for web developers using .NET and Visual Studio. Its a very interesting role and I’m gonna be pretty challenged in the next few months to adapt to my new role. The Web Platform and Tools team has a bunch of tools that they are responsible for, and one of the is the Web Deployment Tool. I think that this will be one of the areas that I will be working in, so if you have any ideas feel free to drop me a line here or privately at sayed –DOT—hashimi [AT] gmail –DOT—com. I will start in this role in about 2 weeks.