| My book on MSBuild and Team Build | Archives and Categories Sunday, August 19, 2012

When we released VS2010 we add support for web.config (XDT) transforms during publish/package. Note: From now on I’ll only use the word publish from now on but the full content relates to packaging as well. In the original implementation when you published your web project the web.config file would be transformed by the file web.{Configuration}.config, where {Configuration} is the project build configuration. For example Debug, or Release. If you publish on Release and there exists a web.release.config we will take your web.config and transform it with web.release.config before publishing.

In VS 2012 (as well as the publishing updates for VS2010 through the Azure SDK) now support the concept of publish specific transforms. You can also now specify the project configuration used for a profile when publishing on the publish dialog. 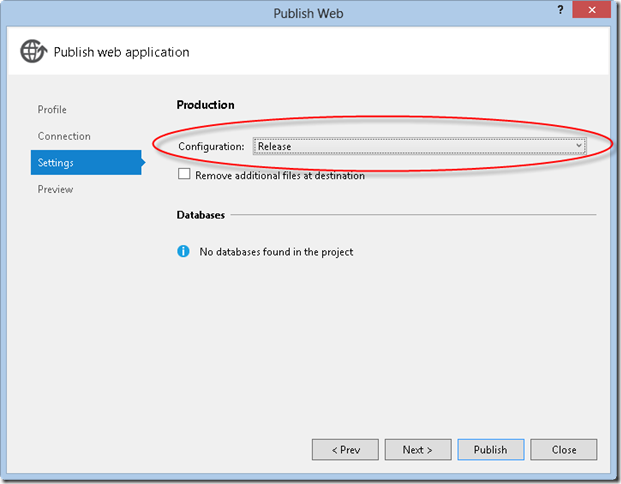 In this case I have created a profile named Production and set the Configuration to Release. When I publish this project the following transformations will be applied (if the files exist) in this order.

I think that we got this wrong when we initially implemented the support. We should have created profile specific transforms instead of ones based on build config, but having these cascading transforms are still pretty useful. For example I may want to remove the attribute debug=”true” from the compilation element and then inside of the profile specific transform we would override appSettings/WCF endpoints/logging config/etc for that environment.

In VS there is a right-click option on web.config for Add Config Transform, but we were not able to update the functionality of that to automatically create profile specific transforms. Don’t worry it will be released soon with our first set of updates for web tooling. For now you will need to create a new file with the correct name and add it to your project. Note: if you want it to show up nested under web.config you’ll need to add the metadata <DependentUpon>Web.config</DependentUpon> to the item in the .csproj/.vbproj file.

Previously the only way to test the functionality for these transformation was to actually publish or package the web project. This gets old pretty quick. In order to simplify creating these transforms we have introduced the Preview Transform menu option. This is the coolest feature in VS 2012 (OK I’m a bit biased, but still its the coolest). 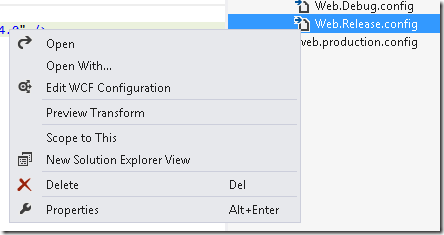 We also do a little bit to help out in case there are errors in either the web.config or a transform. You can see errors in the Output Window and double click it to go directly to where the error exists.

Note: Scott Hanselman has a 5 minute video showing this and other updates.

Another note: If you need to transform any file besides web.config during publish then install my extension SlowCheetah.

Back in November I participated in Virtual Tech Days which is an online conference presented by Microsoft. In the session I discussed the enhancements to web deployment using Visual Studio 2010 and MSDeploy. Some of the topics which I covered includ:

You can download the video & all of my sample files at http://virtualtechdays.com/pastevents_2010november.aspx. In the samples you will find all of the scripts that I used and a bunch of others which I didn’t have time to cover. Enjoy!

In his question he asks (summarizing) can we replace portions of attribute values instead of this entire attribute? So for instance you have the following in your web.config. Below is two sets of appSettings one from Dev and the other from Prod (taken from the original question).

In the above we just want to replace dev with prod and ma1-lab.lab1.domain with ws.ServiceName2.domain. For those wondering currently we have the following transformations out of the box.

At the end of this article I’ve linked to another blog which has more info about these transformations. So it sounds like SetAttributes is almost what we want, but not quite what there. A little known fact is that you can create your own config transformations and use those. In fact all of the out of the box transformations follow the same patterns that custom transformations would. To solve this issue we need to create our own config transformation, AttributeRegexReplace. This transformation will take an attribute value and do a regular expression replace on its value. In order to create a new transformation you first reference the Microsoft.Web.Publishing.Tasks.dll which can be found in the %Program Files (x86)%MSBuild\Microsoft\VisualStudio\v10.0\Web folder. If you are working with a team it is best if you copy that assembly, place it in a shared folder in source control, and make the reference from that location. After you create the reference to that assembly you will need to create a class which extends the Transform class. The class diagram for this abstract class is shown below. 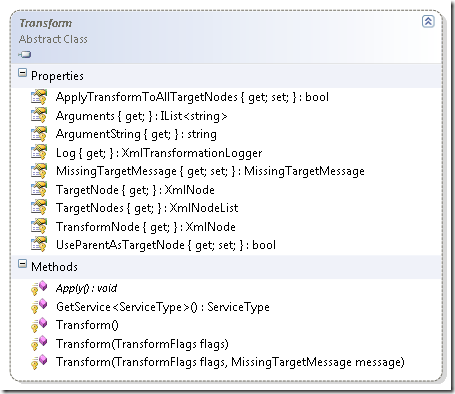 The only thing that you will need to implement is the Apply method. You don’t even need to fully understand all of the properties and methods just the portions that you are interested in. Here we will not cover all the details of this class, or other related classes which exist, but there will be future posts which will shed more light on this area.

In the sample class library that I created, I called the project CustomTransformType. Inside of that project I created the class AttributeRegexReplace. The entire contents of that class are shown below, we will go over the details after that.

In this class we have 3 properties; Pattern, Replacement, and AttributeName. All of these values will be provided via an argument in the config transformation. For example take a look at the element below which contains a transform attribute may look like the following.

In this example I declare that I am using AttributeRegexReplace and then specify the values for the attributes within the (). In the class above I have a method, GetArgumentValue, which is used to parse values from that argument string. When your transform is invoked the string inside of () is passed in as the ArgumentString value. If you are using a , as the argument separator, as I am, then you can use the Arguments list. Which will split up the arguments by the , character. Surprisingly in the 101 lines of code in the sample there are only a few interesting lines. Those are what’s contained inside the Apply method. Inside that method I search the TargetNode’s attributes (TargetNode is the node which was matched in the xml file being transformed) for an attribute with the same name as the one specified in the AttributeName property. Once I find it I just make a call to Regex.Replace to get the new value, and assign it. Pretty simple! Now lets see how can we use this.

Let’s say you have the following very simple web.config

If we want to be able to use our own transform then we will have to use the xdt:Import element. You can place that element inside the xml document anywhere immediately under the root element. This element will allow us to utilize our own transform class. It only has 3 possible attributes.

I chose to use path, because I just placed the file inside of the MSBuild Extensions directory (%Program Files (x86)%MSBuild) in a folder named Custom. Then I created my config transform file to be the following.

Then to run this I created an MSBuild file, PerformTransform.proj, which is shown below.

This file uses the TransformXml task as I outlined in a previous post Config transformations outside of web app builds. Once you execute the Demo target with the command msbuild PerformTransform.proj /t:Demo you will see the file web.tranzed.config with the following contents.

So you can see that the replacement did occur as we intended. Below you will find the download link for the samples as well as another blog entry for more info on the out of the box transformations.

Then we create another file, transform.xml, which contains our transformations. That file is shown below.

Then we can easily execute the transformations by using MSBuild. So I created a file named trans.proj and it is shown below.

This MSBuild file uses the TransformXml task which is shipped with Visual Studio 2010. We specify the source file, transform file and the destination. Pretty straight forward.

In order to execute this I open a Visual Studio 2010 command prompt, browse to the directory containing both files, and enter the following command

Once you do this then you will find the file app.prod.config with the following contents.