| My book on MSBuild and Team Build | Archives and Categories Saturday, December 11, 2010

A few days ago Jason Zander blogged about the availability of Visual Studio SP1 Beta (all links below in resources section). I am happy to let you guys know that with SP1 Beta we have enabled integration of IIS Express into Visual Studio. After you have installed SP1 Beta you have to download IIS Express separately for the option to “light up”. After you’ve downloaded and installed IIS Express you can now create Web projects and Websites which use IIS Express instead of Cassini (the default web server used in Visual Studio). For more information regarding the difference between IIS Express and IIS/Cassini please see Scott’s blog linked below. Visual Studio 2010 has two types of web projects; Web Application Project (WAP) and Website projects. You can use either project type with IIS Express.

For both WAP and Website projects which were using Cassini we have a very simply method for you to use IIS Express. You can just right click then select the context menu option “Use IIS Express”. Take a look at the screen shot that follows for that command. 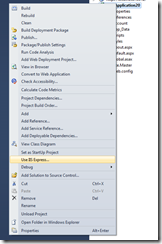 After you do this your project will use IIS Express instead of Cassini going forward. If you wish to revert back to using Cassini you can just right click on the project and select “Use Visual Studio Development Server…” You can also make IIS Express your default web server for new projects as well.

For Web site projects when you create a new site you can create it such that IIS Express hosts it instead of Cassini. From Visual Studio when you select File->New-> Web Site you will see the New Web Site dialog. On that dialog you can click on the Browse button (see image below). 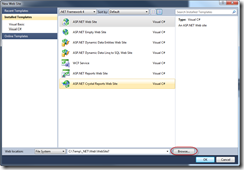 After you click that you will be prompted to enter the location where the site will be located. From there you can select “Local IIS” and the create a new IIS Express site for it. 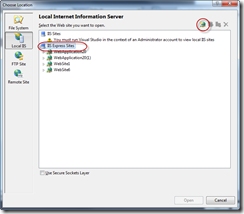 In this dialog you need to select IIS Express Sites then click on the Create New Site button located towards the upper right hand corner. Once you do this it will create a new IIS Express site for your Web site.

After you have enabled IIS Express to be your projects web server, when you start debugging, or just start running your app, from Visual Studio you will see a new system tray icon appear (

). You can right click on this icon to to quickly see what applications it is hosting. Each hosted application will have its own context menu. From this menu you can browse out to the application as well as stop it quickly.

You can also click on “Show All Applications” to open a dialog which give you more information about the sites that IIS Express is hosting. For example I opened this dialog and selected a running application and the result is shown in the image below.

There are a few notable values here

You can customize a few options for your site directly from Visual Studio. If you select your web project/site in the Solution Explorer and then open the Properties pane (you can right-click and select Properties on the project/site if it is not visible) you should see something similar to the following. 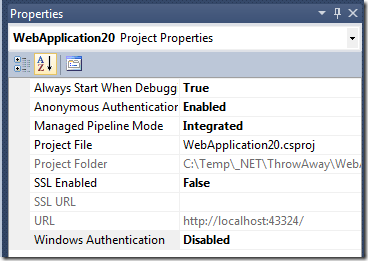 These settings will change how IIS Express hosts your site. One of the missing features of Cassini was the ability to host SSL sites. In IIS Express you can enable this. For example for this site I changed the value for SSL Enabled to be True, then a new URL was assigned so that I can use SSL to browse to the site. Please note that IIS Express will install a self-signed cert and you will see the following security warning from Internet Explorer when you browse to an https URL hosted by IIS Express.

There are currently some known issues with IIS Express which are listed below. If you run into any more please let us know.