| My book on MSBuild and Team Build | Archives and Categories Friday, August 14, 2009

I am a pretty big fan of Web Deployment Projects (2005 version) I try and promote their use whenever I get a chance. The other day I had a customer tell me that he added a WDP to his solution and now all the devs were complaining because the build was taking much longer than it was previously. The reason behind this is pretty simple, when you build in Visual Studio it will build the WDP will call the aspnet_compiler.exe and the aspnet_merge.exe tool on your site(s) which can be a lengthy process. When you add a WDP to your solution by default it will be configured to build for each defined configuration. To alleviate this headache you should go to the configuration manager and disable these from building.

Once you open the configuration manager you will be presented a dialog like the following. 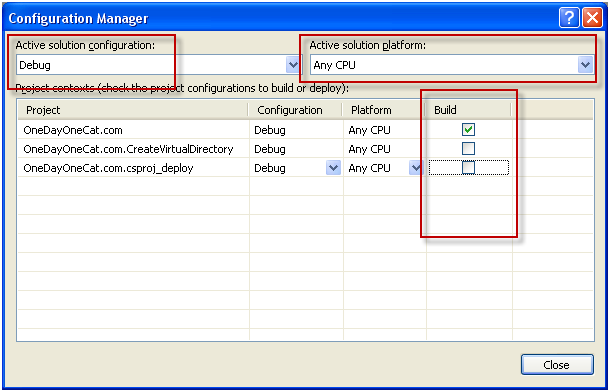 Here what you should do is make sure that the Build check box is un-checked for all WDPs. You need to do this for each configuration/platform combination. The idea here is that you want the developers to build inside of Visual Studio as they normally would without any hassles. If developers have to wait for a longer time for a build to complete, not only will it waste their time (which if you add those minutes up becomes a lot of time) but also breeds contempt towards WDPs. Basically they will associate longer build times with WDPs and then they will dislike them. This is the opposite of what you want. You want to encourage them to use WDPs. If the developer needs to build the WDP they can always right click on the WDP and then click build. But better would be to create a build script that can be run on you CI server as well as locally on the developers machine to perform a full build. I am not a fan of using solution files for CI builds, so I would say to create a "master" MSBuild file which uses the MSBuild task to build each project in the correct order and for every desired configuration. If you take this approach then you will never need a WDP to build in your solution. But if you want to use a solution file to build on your CI server then you have at least 2 options.

From these two options I would pick 1, but best would be to create a build which didn't rely on solution files.